The Indian Premier League - or IPL - is the premier T20 cricket tournament in the world. It's played in India but features Indian as well as foreign players though each team is limited to 4 foreign players in the playing 11. Let's take a look at some IPL data. The source of the the data is from Data World. The data lists every match, the opponents, the venue, who won the toss, what they decided to when they won the toss and then who won and both how much by and if they won by wickets (chasing) or by runs (defending). All matches from 2008 through 2017 are included.

10 seasons is a decent amount of data to look at. Here are some questions we will look to answer:

Overall, the data set has information on 637 matches. Some teams are regulars like the Mumbai Indians or the Delhi Daredevils or the Kolkata Knight Riders that have played every single season. Some others such as the Gujarat Lions or the Kochi Tuskers Kerala or Pune (Warriors and Rising Supergiants) have had only one or two or three seasons. Then of course a powerhouse team like Chennai Super Kings has played every year but had to skip the 2016 and 2017 season due to scandal. In other words the data is not exactly uniform and consistent across all teams but real world data rarely is!

It's all about the results

One of the biggest criticisms about Cricket is the length of the game. 5 days for test matches. And fairly often without a result i.e. a 'draw'. While draws are all very gentlemanly, spectators want a winner and a loser and that's what led to One Day Internationals (ODIs) which finished in one day and almost always guaranteed a result. Fast forward to T20 where not only do we get results, we get them fast! The whole game is over in an evening: 3 hours or so. This is similar to a Baseball or American Football game. How result-oriented are the IPL matches? 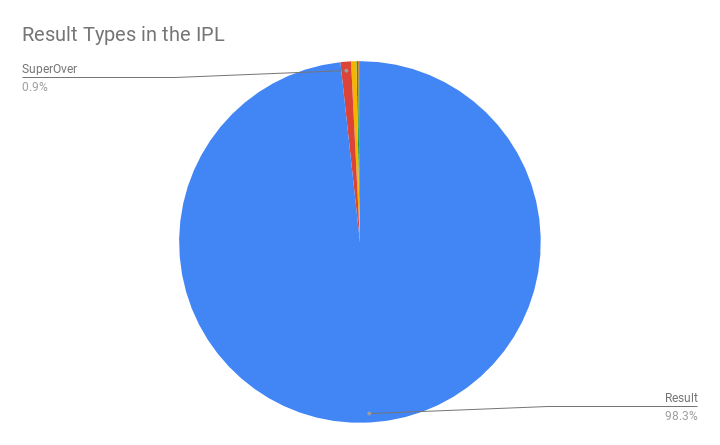 Results are obtained over 99% of the time! Of the 637 matches, 626 have resulted in an outright winner, 6 went to a superover, 3 were no result and there was 1 tied match and 1 abandoned match. The other types of results don't even register on the graph.

Which are the dominant teams?

Not many surprises here: the strongest teams win the greatest % of their matches. 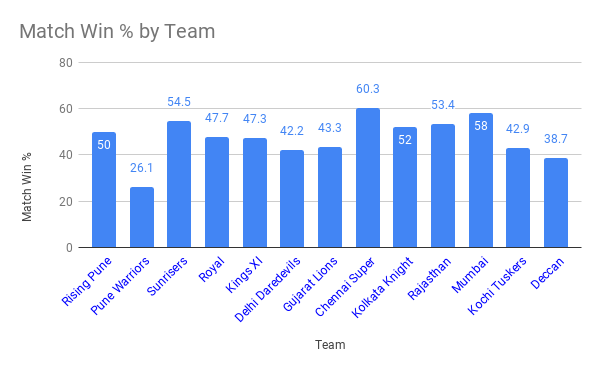 Winning the toss should be a 50/50. Atleast over dozens or hundreds of matches. But are there any teams that seem to have more luck with the toss than others? The Deccan Chargers won 57.3% of their tosses - that luck seems to have turned when they became the Sunsrisers Hyderabad and dropped to 45.5%! Chennai Super Kings are on the money with 50.4% toss wins. Of the most long-tenured teams, Royal Challengers Bangalore do the worst with 45.8% toss wins and Mumbai Indians do the best with 54.1% toss wins. 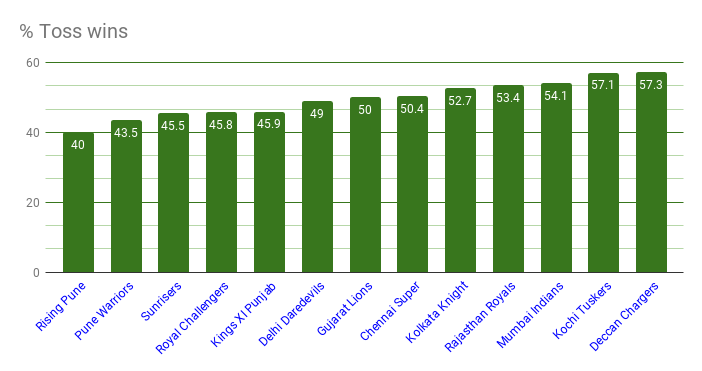 This question often gets asked of the winning captain after the match. Winning the toss is just dumb luck. How about winning the match itself? let's see which teams do best at winning the game when they win the toss. This has to be seen in conjuction with overall win %s to see if the team's likelihood to win improves when they have also won the toss and decided whether to bat first or field first. Now it gets interesting. The blue bars are 'raw' win percentages - like in that chart above. The red bars are when the team won the game after winning the toss. 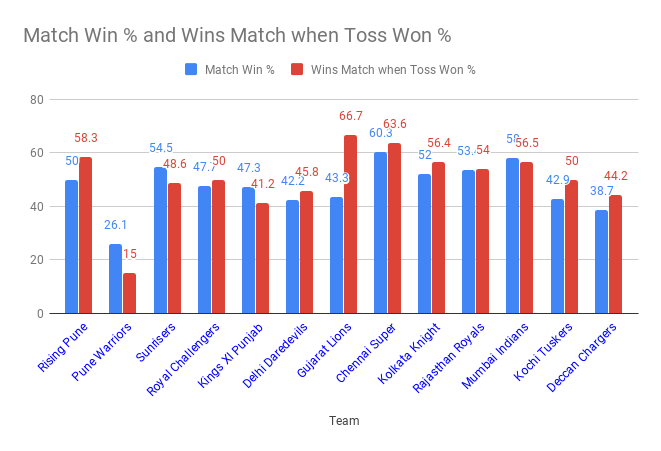 A large majority - 9 of the 13 teams - wins more often when they win their toss. This makes sense because teams that win the toss get to choose to either bat first or chase first based on their perceived strengths and match conditions. But three teams - Pune Warriors, Sunrisers Hyderabad and Kings XI Punjab do worse. Perhaps the next time when the umpire tosses the coin in the air, they had best call out Pass?!

In the IPL, is there a clear preference for the toss winner to bat first vs field first? 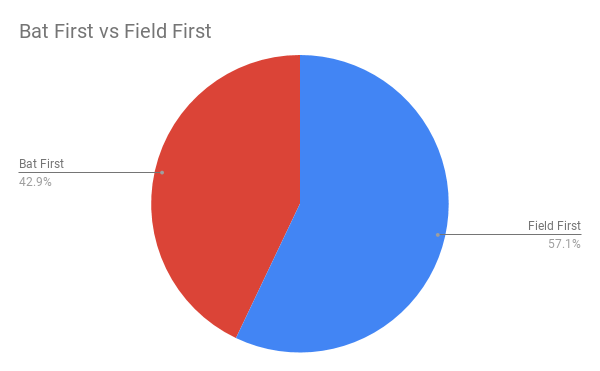 There clearly is! By almost a 15 point margin, teams would rather field first and have a set target to go after than defend a score by batting first.

IPL matches are thrilling affairs - for the most part. How close are these contests? One way to explore this is to see the victories by margin. First we look at wickets. 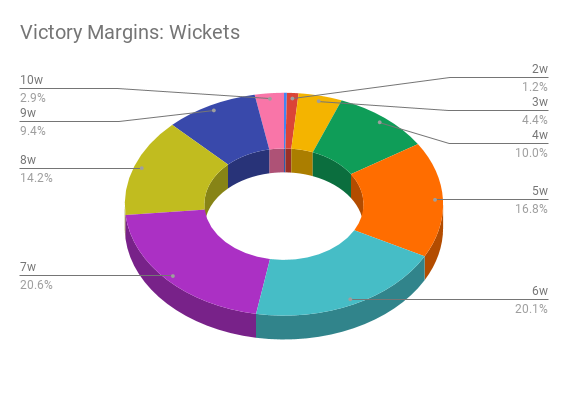 The closest margin is, of course, by 1 wicket. That is, a team chasing a score wins after losing all but their last wicket. There's been exactly one one-wicket win in 10 years! This was when KKR beat KXIP in the 2015 season in Eden Gardens. That's unusually low for a tournament known for thrills. The rest of the spread is also interesting. The most common wicket margins are 6 and 7 wicket wins - just over 20% each. Whenever teams win while chasing they do it quite comfortably i.e. with half or more of their wickets remaining a staggering 84% of the time!

Next, we look at victories by run margins. That is, a team succesfully defending the score they set by batting first. 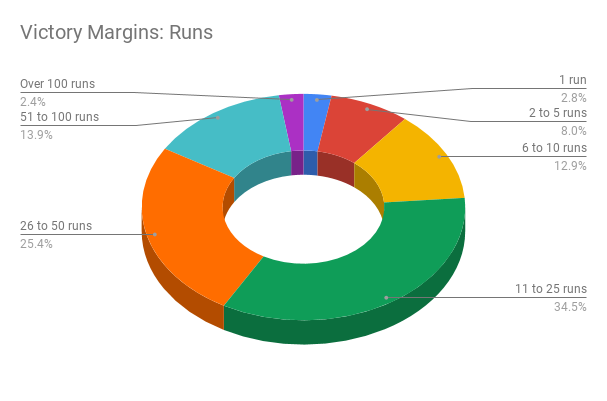 8 matches have been won by one run. Beyond that, almost 25% of all matches have been won by 10 runs or under. About 60% by 25 runs and under - though that is starting to be a wide margin by T20 standards. Still the number of thrilling matches won by the team defending their total seems to be a much larger fraction than the ones by the team batting second and chasing a score set for them. Hopefully that was interesting! If you liked this, please check out the FIFA Data Visualization
About | Projects | Reading | Writing | Photography
email: raghu@raghusrinivasan.com